I originally wrote the attached utility in response to a question about editing external files from Access by Access World Forums member smig in this thread: 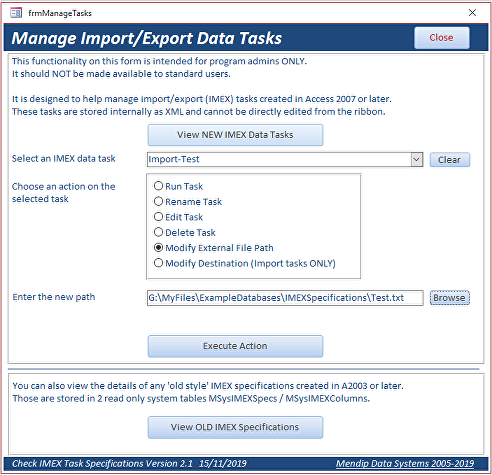 I would like to thank fellow AWF members jdraw & the DBGuy for prompting me with starter code.

Thanks also to smig for suggesting a procedure that I adapted.

Prior to Access 2010, import/export (IMEX) specifications were saved in 2 system tables : MSysIMEXSpecs / MSysIMEXColumns.

This system was replaced with a wizard driven & more powerful  XML based system of Import/Export Data Tasks in Access 2010. However, ease of use has also led to greater obscurity in how it works.

For example, the contents of a saved Data Task cannot easily be viewed or edited

This is an example of the XML for an Import task:

The attached example database includes a module modIMEX containing code to do all of the following:

NOTE: you do NOT need to know the existing path to use this

a new table name. Once again the existing value is NOT needed

The example database has 2 import & 2 export data tasks for use with a sample file test.txt

Store this text file (supplied) in the same folder as the sample database or any folder of your choice.

However, the four IMEX tasks will not run unless your path is the same as mine – VERY UNLIKELY!

Using the above procedures you should easily be able to edit the XML to make these work for you.

All these procedures can be run from the main form

The main purpose of the form is so that it can be used by program admins where appropriate to modify saved data tasks when an application is deployed.

Using a form eans that this functionality can be used with compiled ACCDE files as well as ACCDB files.

When the form is loaded, the hidden system table USysIMEXSpec is automatically created (using DDL) if it doesn't exist.

The application also contains two reports to view details of:

It should be stressed that standard users should NEVER have access to the code used or the form.

To use this in your own applications, you only need to import the form frmManageTasks, the two reports and the module modIMEX.

It is still possible to create the 'traditional' IMEX specification on TEXT files by clicking the Advanced button on the IMEX wizard then clicking Save As on the next window.