Get Value in Previous Record

This example was written in response to a couple of questions at various Access forums.

This was a fairly typical example where a user wanted to calculate the difference between values in the current record with those in the previous record. For example for calculating energy consumption between meter readings.

A common solution to this type of problem is to use subqueries. Allen Browne has an article using that approach - see Get the value in another record section on his subqueries page

This article demonstrates a different approach and is based on the data in the forum post.

The data in Table1 shows the visit dates for 2 employees

The method used here is to create a query and add the table to the query twice.

The second copy will be shown as e.g. Table1_1

Now add other fields & criteria as shown below: 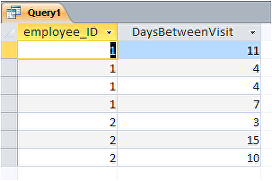 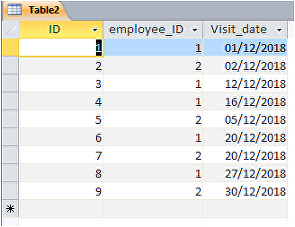 The filter criteria provides a link between the current and previous records for each employee.

The query SQL is:

This setup works perfectly for this simple scenario.

However, it will fail if all the records for each employee are not added in sequence

In this second example, the order has been deliberately jumbled (Table2)

Create a new query (Query2) and sort the data by employeeID & visit date.

Add a rank order field then use that as the reference field in place of the ID field:

The ranking query SQL is:

This final query SQL is:

FROM Query2 INNER JOIN Query2 AS Query2_1 ON Query2.employee_ID = Query2_1.employee_ID

This type of solution will work for many examples of this type.

It runs faster than a subquery & is more transferable than creating a user defined function for the task.