This example focuses on the use of cascading combo boxes. It is an approach which is particularly useful where you have a very large dataset that would be impossibly slow to search using a single combo box or listbox.

For example, in my UK Postal Address Finder app (UKPAF), I have a table of 2.6 million postcodes.

For info, UK postcodes have 7 or 8 characters including a space

For anyone interested, additional info is provided in the attached PDF file

NOTE: All the above are official UK postcode terminology except zone (added here to assist with searching postcode sectors)

The normal postcode entry is a textbox. However, a postcode builder form is available when

you aren't sure which postcode to enter.

Searching a dataset of this size is obviously impossible using a single combo box. To make it manageable, the search is broken down using 5 cascading combos. The contents of each combo are dependant on the choices made in the previous combo which reduces the size of each list.

Each combo is based on a separate table filtered on the previous selection which makes it very fast. In addition, all fields used in the combo searches are indexed. This increases the database size BUT makes a dramatic difference to the search time needed

The attached example is a cut down version of the postcode builderused with the UKPAF application to make the file small enough to upload here. It only has data for two of the 125 postcode areas in the UK - Bristol (BS) & Kirkwall (KW). Inactive postcodes have been removed from the list. This reduces the total number of postcodes to around 28500 instead of the full data set of 2.6 million

Please keep this in the same folder as the database.

Click the OK button to start using the postcode builder.

Further dropdown lists appear in turn for district, sector and zone until you select a full postcode using the final combobox

In the full app, a Google static map  is automatically downloaded. This map is centred on the geo-coordinates for the selected postcode and can be zoomed in/out

In the attached example, the mapping feature has been removed. Instead it just uses the same example map for each postcode 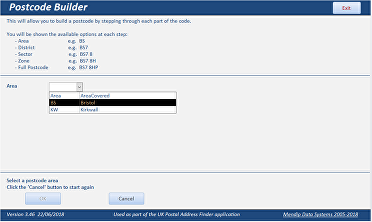 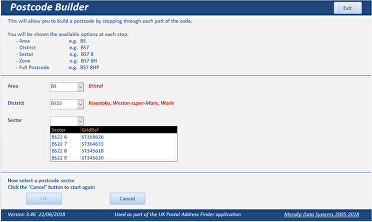 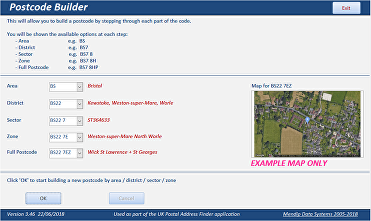